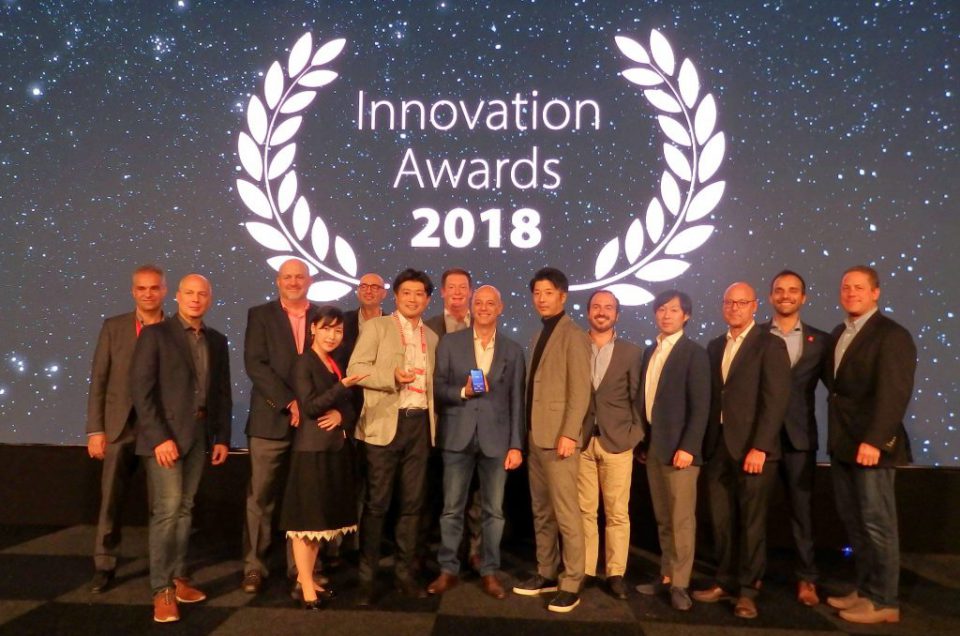 SOOTH Corporation (headquartered in Minato-ku, Tokyo; Yasutoshi Nukada, President and CEO; hereinafter SOOTH) is pleased to announce that its “Heat Stroke Countermeasures Project” has been awarded in the Human Impact Award category of the OutSystems Innovation Awards 2018. This is the second year in a row that the project has won this award, following last year’s award*.

The OutSystems Innovation Awards, organized by Portugal-based OutSystems, have been recognizing the achievements of organizations and associations that have dramatically innovated in IT by creating advanced, productive and significant business value using OutSystems, the world’s leading ultra-fast development platform, since 2014.
The aim of the Heat Stroke Countermeasures Project is to reduce the number of occupational injuries caused by heat stroke in Japan’s construction and other industries, and the project was recognized for its efforts to rapidly develop a prototype of a solution that includes a smart helmet equipped with a variety of biometric sensors, a smartphone app to link various devices, and a heat stroke countermeasures and management system in three months, and to reorganize the work site with a focus on the workers.

Yasutoshi Nukada, President and CEO of SOOTH, Yukio Kitano, Director and CTO of the company, and Yusuke Imaoka, President of Altitude, took the stage at the award ceremony held on October 9th in Amsterdam, the Netherlands.

This project aims to predict and reduce the occurrence of heat stroke by tracking the health status of workers, and has realized the link between the smart helmet equipped with various biometric sensors and the workers’ and managers’ applications. When heat stroke is predicted, alerts are sent immediately to the manager’s PC, iPad, iPhone, and Apple Watch and to the worker’s iPhone.
Until the solution provided by this project, it was difficult to predict the occurrence of heat stroke in advance; however, this solution is expected to reduce the number of occupational injuries caused by heat stroke and the associated costs.

In this project a smart helmet was developed as the core of the solution, based on SOOTH’s SOOTH Platform, and a heat stroke countermeasures management system and applications for smartphones and tablets were also developed using the ultra-fast development platform “OutSystems”.
Altitude Incubation also led the project, incorporating the lean startup methodology and Agile development, and was responsible for defining the service content and requirements, designing the entire solution, and project control of the Agile development. OutSystems’ elite partner, BlueMeme Inc. provided development services. The development cycle from development to review was rotated at high speed, realizing the speed of development that OutSystems is capable of and the resulting increase in productivity.
SOOTH Platform, the foundation of the solution, was developed as an evolution of AOI Pro.’s VR Insight™, which won the Most Innovative App Award at last year’s OutSystems Innovation Awards 2017.

Comment by Yasutoshi Nukada, President and CEO of SOOTH

SOOTH is a creative company that captures biological responses as data, aggregates them into SOOTH Platform, an experience design platform centered on vital sensing, and uses the results of that analysis to design experiences for life, industry and society. We will continue to evolve and deepen our solution services so that the work we have done in this project can be used in many industries and businesses.

Comment from Yukio Kitano, Director and CTO of SOOTH
I am very pleased that our efforts have received this award. With Japan’s hot and humid climate, heat stroke occurs frequently and is a serious problem. Occupational accidents are occurring in many different industries, in particular the construction, manufacturing, and transportation industries, and there is an increasing need for countermeasures. In this initiative, we analyzed the current operations with a focus on people (workers and managers) and redesigned the experience, taking into account how to reduce the burden of introduction and lower the psychological burden on the workers. By integrating the “SOOTH Platform” and the innovative development platform “OutSystems Platform” to implement the experience we designed, we were able to complete the heat stroke countermeasures system in a short period of three months. The system was developed using agile development, and the strong driving and development capabilities of Altitude and BlueMeme allowed for feedback from the field to be immediately reflected in the system, so we were able to design a more human-centered experience. In the future, we will continue to expand this solution, while taking advantage of the features of OutSystems to create a growth-oriented system that can immediately reflect feedback from the field. In addition, as the number of visitors to Japan is expected to increase in the future, heat stroke can be a major risk, so we would like to promote awareness and risk reduction. Going forward, SOOTH will design human-centered experiences in a variety of scenes and use cases in addition to heat strokes and will continue to deliver new experiences in the future through the combination of the SOOTH Platform and the OutSystems Platform.

Mark Weaser, Vice President, Asia Pacific, OutSystems
The OutSystems Innovation Awards are given to companies that have used OutSystems to build innovative and cutting-edge applications. The Human Impact Award was given to SOOTH’s “Heat Stroke Countermeasures Project” with the expectation that the combination of biometric data analysis and multi-device utilization will have an impact on the improvement of human-centered workplaces.

Inquiries regarding the above